Our Meetings Are Held Thursday Nights at 7:00PM at the Thurmont Scouting, Inc. Building, 26 Elm Street

As a young African American, Frank Coleman found a place in the Boy Scouts of America (BSA) that accepted him, encouraged him, and helped prepare him for life as citizen and a successful professional alongside youth of all colors and credos, despite societal prejudices of the day.

In 1927, Frank "Tick" Coleman became one of the first African Americans to earn the rank of Eagle Scout, Scouting's highest rank achievement, leading the way for thousands of other African American youth. Coleman joined a Scout troop through the local Episcopal Church in his neighborhood because his mother wanted something for him to do after school.

"I wanted to become an Eagle Scout because this was the top honor you could get in Scouting," said Coleman. "It is a great achievement, and regardless of what I got involved in, I wanted to be at the top. It was hard and very interesting to get to that level, but I was anxious to walk down that road.

The BSA has long been a celebrant of diversity, providing youth and character development programs for children across ethnic, income, and religious boundaries. The BSA has celebrated diversity and the inclusion of African American Scouts and professional Scouters as far back as 1911, when the first African American Scout troop was chartered in Elizabeth City, N.C. By the end of 1927, African American troops were chartered in every region of the United States, and ten years later, Scouts from these troops participated in the first National Scout Jamboree in Washington, D.C.

Like many other youth in America, Coleman received encouragement and support and gained skills and experiences through Scouting that would not have otherwise been available to him at the time, such as outdoorsmanship, lifesaving and swimming. His involvement with Scouting helped him overcome societal barriers as well as challenges that come with growing up in an urban area.

As with Scouts today, Coleman benefited greatly from the support of parents, his church and his Scoutmaster, Mr. Morgan. Scouting helped Coleman in his youth and in his professional career, particularly in times of struggle, which he faced regularly as a reflection of the attitudes of society.

In honor of his years of service and his trailblazing Scouting experience, the Boy Scouts of America National Council Scoutreach division will award the first Dr. Frank "Tick" Coleman National Service Award for full-time paraprofessional Scouters this month during Black History month. Scout executives at more than 300 local Boy Scout councils throughout the United States will nominate their top full time program aide, and each of the four Scouting regions will select eight recipients of the award. The Award will be given every other year.

"We honor Dr. Coleman's involvement and support of Scouting," said George Randall, director, Scoutreach Division, BSA. "Since its inception, the BSA has strived to ensure that all youth are provided with the opportunity to experience the long-term benefits of Scouting, and we remain committed to developing programs that will help us to achieve this through the efforts of great people like Dr. Coleman."

Today, African American Scouts and Scouters have a profound impact in communities throughout the United States and at every level of Scouting--from Tiger Cub to Eagle Scout--and they include such icons and dignitaries as former NBA stars Michael Jordan and David Robinson; key political figures such as Togo D. West Jr., former secretary of the Army, and Samuel Pierce, former secretary of Housing and Urban Development; and celebrities such as Richard Roundtree. The BSA continues to specifically address the needs of these Scouts and other multicultural youth through culturally relevant programs that speak to unique needs. BSA's programs build upon the commitment to ensure that all youth in urban and rural communities have an opportunity to join Scouting.

Since its inception, the BSA has trained young people in citizenship, service, and leadership to better serve America's communities and families through its quality, values-based program. In the past 95 years, the nearly 110 million members of Scouting have provided countless hours of service. The more than 1.7 million Eagle Scouts alone have provided an estimated 36 million hours of service through their Eagle projects.

Serving nearly 4.5 million young people between 7 and 20 years of age with more than 300 councils throughout the United States and its territories, the Boy Scouts of America is the nation's foremost youth program of character development and values-based leadership training. For more information on the BSA, please visit www.scouting.org.

We Are Chartered By:
The Thurmont Lions Club 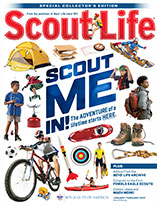